On this day [Australia Day] the white people are rejoicing, but we, as Aborigines, have no reason
to rejoice on Australia’s 150th birthday. Our purpose in meeting today is to bring home to the
white people of Australia the frightful conditions in which the native Aborigines of this continent
live. This land belonged to our forefathers 150 years ago, but today we are pushed further and
further into the background.
The Aborigines Progressive Association has been formed to put before the white people the fact
that Aborigines throughout Australia are literally being starved to death. We refuse to be pushed
into the background. We have decided to make ourselves heard. White men pretend that the
Australian Aboriginal is a low type, who cannot be bettered [improved]. Our reply to that is, ‘Give
us the chance!’ We do not wish to be left behind in Australia’s march to progress. We ask for full
citizen rights.
Jack Patten’s opening address to the Day of Mourning Congress, Sydney, 26 January 1938.

The 26th of January, 1938, is not a day for rejoicing for Australia’s Aborigines; it is a day of
mourning. … If you [non-Aboriginal Australians] would openly admit that the purpose of the
Aborigines Legislation has been, and now is, to exterminate the Aborigines completely so
that not a trace of them or of their descendants remains, we could describe you as brutal, but
honest. … You hypocritically claim that you are trying to ‘protect’ us; but your modern policy of
‘protection’ (so-called) is killing us off just as surely as the pioneer policy of giving us poisoned
damper and shooting us down like dingoes! … We ask for equal education, equal opportunity,
equal wages, equal rights to possess property, or to be our own masters – in two words: equal
citizenship!

Extract from pamphlet distributed on the Day of Mourning, Sydney, 26 January 1938.

To commemorate the sesquicentenary (150th anniversary) of European settlement, the NSW Government
planned to re-enact the arrival of the First Fleet in Port Jackson; for this Aboriginal actors
were required. As the Aboriginal organisations in Sydney refused to participate, the government
removed a group of Aboriginal men from a reserve in Western NSW and brought them to Sydney. On
Australia Day they were taken to a beach at Farm Cove, where they were told to run up the beach to
convey the impression that they were fleeing in fear from the British. 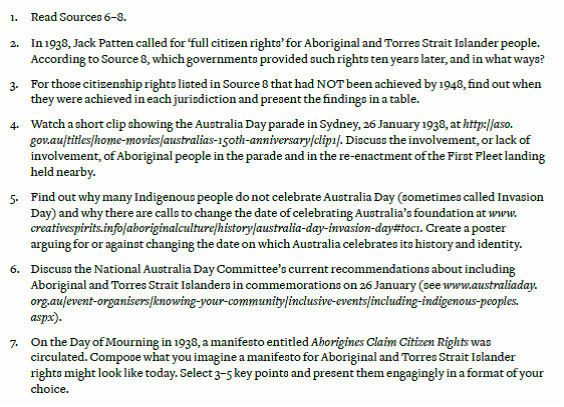