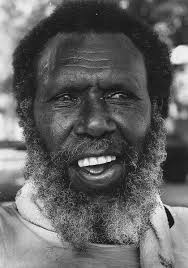 Eddie ‘Koiki’ Mabo was born on 29 June 1936, in the community of Las on Mer, known as Murray Island in the Torres Strait. His birth name was Eddie Koiki Sambo; however he was raised by his Uncle Benny Mabo through a customary ‘Island adoption’. When Eddie was growing up, life for the people of the Torres Strait Islands was strictly regulated with laws made by the Queensland Government. However, the Meriam people strived to maintain continuity with the past and continued to live a traditional lifestyle based on fishing, gardening and customary laws of inheritance. At the age of 16, Eddie was exiled from Murray Island for breaking customary Island law, and he set off for the mainland where a new life was waiting for him. Eddie had many jobs throughout his life, including an assistant teacher; a deck hand on pearl lugger and tug boats; a fettler on the Queensland railway tracks; a cane cutter; and a grounds keeper. Eddie was also an artist and writer. Some of his art works and writings can be found at the National Library of Australia.

It was during his time as a grounds keeper at James Cook University in Townsville that Eddie learned about Australian land ownership laws. He believed the land he grew up on, Murray Island, belonged to the Torres Strait Islander people who had lived there for thousands of years. But, Australian law stated that the Government owned the land. Eddie believed that these laws on land ownership were wrong and decided to fight to change them.

In 1981, Eddie Mabo made a speech at James Cook University in Queensland, where he explained his people’s beliefs about the ownership and inheritance of land on Murray Island. A lawyer heard the speech and asked Eddie if he would like to challenge the Australian Government through the court system to decide who the true owner of land on Murray Island was—his people or the Australian Government.

Eddie did not live to see the final decision passed down from the High Court. Ten years after the case was first heard, at the age of 55, Eddie died from cancer. Five months later the High Court ruled in the plaintiff’s favour, expelling the notion of terra nullius from Australian law and paving the way for the creation of land rights legislation called Native Title. In 1992, Eddie was posthumously awarded the Australian Human Rights Medal by the Human Rights and Equal Opportunity Commission and in 1993, the Australian newspaper named Eddie the Australian of the Year for 1992.

Three years after Eddie passed away, a traditional Torres Strait Islander memorial service known as a tombstone opening was conducted in Townsville. The very next day, his gravesite was vandalised with racist emblems and his tombstone partially destroyed. Due to this vandalism, Eddie was reburied on Murray Island, where he was given the traditional burial ceremony of a Meriam King, the first performed in over 80 years.

After watching the ABC series 'Mabo' you will complete the following activities:

1. Eddie Koiki Mabo is one of Australia’s most significant citizens. Many people regard Eddie as a national hero. Construct a timeline of Eddie’s life containing what you consider to be the ten most significant events of his life. Be ready to justify your choice of events during class discussion.

Go through the Timeline and watch the video MABO The Man to get some tips and clues.

2. As a young man working in northern and outback Queensland, Eddie Koiki Mabo witnessed and experienced racism and inequality. He dedicated his life to fighting for recognition and equality for Indigenous Australians. Investigate methods of public protest available to Eddie during the 1970s and 1980s.

Using the Timeline and video From Little Things Big Things Grow for reference, name and describe two major political protest events that occurred between 1970 and 1990.

3. With his team of supporting lawyers, Eddie Koiki Mabo fought a ten-year battle in the Australian court system. Watch the documentary The Mabo Case. Draw your own timeline of the legal events that occurred in regard to Eddie’s case from 1982 to 1992. Include at least five public comments made by Australian politicians.

4. In the latter part of the 20th century Australian society’s increasing desire for civil rights spurred the growth of the union movement and the Land Rights Commission, as well as other equal rights movements.

Research one of the civil rights causes of the period and write five key points describing how the movement impacted on equality for all in Australia.


Your work must be submitted on StudyTurf